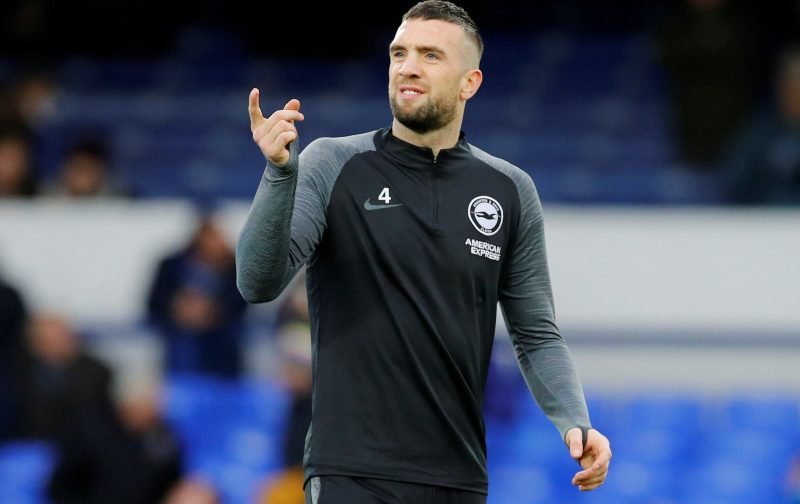 Some West Ham United fans have been reacting on social media to reports by the Express & Star, claiming West Bromwich Albion have held talks with Brighton & Hove Albion defender Shane Duffy over a potential summer transfer.

It is suggested West Brom have met with Duffy to hold initial talks over a move to the Hawthorns following Slaven Bilic’s side securing promotion into the Premier League.

No official offer is yet on the table, with the West Midlands side continuing to monitor other targets and have spoken with Benfica over a second loan spell for Filip Krovinovic after he proved to be a big hit with supporters.

West Brom hope any temporary agreement for Krovinovic could include a future option to buy so long as the Baggies are not relegated back to the Championship, which would aid West Ham’s hopes of landing Duffy.

Duffy is believed to be a transfer target for David Moyes this summer with the Irons head coach keen to bolster his backline at the London Stadium, having failed to seal a deal for the Seagulls centre-half during the winter market.

The Hammers had been linked with a move to sign Duffy during the January window and were believed to have been close to reaching an agreement, with talk of a £10million fee.

Brighton are expected to demand a similar fee in order to part with Duffy following the conclusion of the 2019/20 Premier League season, which saw the Ireland international become a backup under Graham Potter.

Duffy started just 12 Premier League fixtures and never more than three in a row during the recent campaign, in which the 28-year-old helped the Seagulls to two clean sheets through an average of 0.9 tackles, 1.1 interceptions, 3.7 clearances, 3.7 aerial duels won and 1.5 ground duels won per game, according to Sofa Score data.

He also never committed an error that led to a shot on goal or resulted in a penalty being awarded against Brighton.

Lots of West Ham fans have met reports of West Brom holding talks with Duffy by venting their frustrations at the Irons needing to sell before they can buy, and potentially losing out on a defensive target Moyes was potentially keen to acquire.

Not actually bothered if we get Duffy, but if that is who Moyes wants & we’re getting beaten to him by WBA then we are, not for the first or last time this season, the ultimate banter club.#GSBOUT

Not all Hammers fans believe a centre-back should be a priority this summer, and instead feel the Irons should be focusing their efforts elsewhere during the transfer window.

We don’t even need a CB really

He doesn’t fit our age range of players we’re looking at anyway so no biggie.

The sentiment that Moyes does not need another centre-half is not a thought widely shared at the London Stadium, where some supporters believe the current group are not up to scratch any longer.