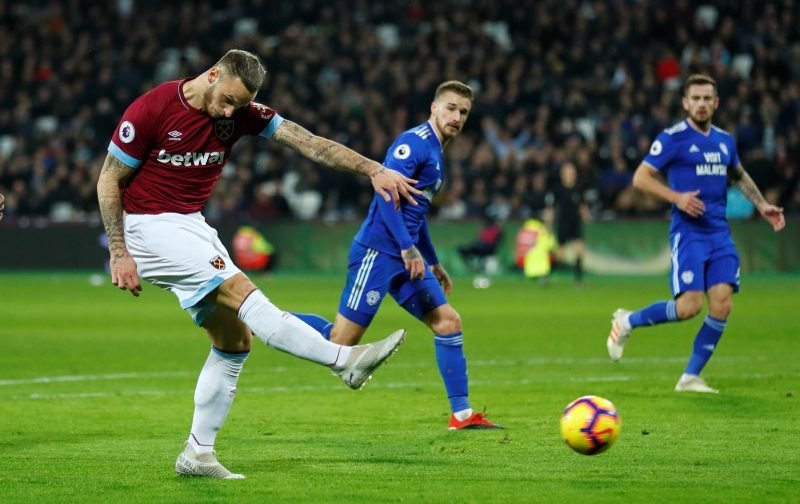 West Ham travel to South Wales on Saturday with the chance of dealing a potentially killer blow to Cardiff City’s survival chances, and leading Sky Sports pundit Paul Merson expects us to do just that.

The former Arsenal ace is going for a 2-0 win on the road for Manuel Pellegrini’s men, as he feels the toll of continually taking a beating in the top-flight has seen Neil Warnock’s squad drop to their knees and the towel is on the edge of the ring.

Going into the weekend, our hosts at the Cardiff City Stadium will be arriving on the back of three consecutive defeats where they have shipped in ten goals.

In that time, the Hammers have beaten Fulham and Newcastle United with ease, and look to maintain the pressure on Watford and Wolverhampton Wanderers in the race for Europe.

Our recent head-to-head record with the Bluebirds is also very strong, as the Welsh outfit have not beaten West Ham since 2011 and we have scored 14 goals in the seven encounters that followed.

All that combines very favourably for Pellegrini’s side this weekend, with Merson claiming in his weekly predictions: “Cardiff looked like they were doing alright, they had two nice home games but they got ripped to shreds in both of them and I think that’s knocked the stuffing out of them, I really do.

“West Ham did well the other day against Newcastle and I think they will have too much for Cardiff.

“I think those two results at home were massive football results for Cardiff. It wasn’t the losing as such, it was the way they got beaten, and then the manager called them out and said a few of them weren’t at it.

“The season is just taking its toll now. Getting beaten a lot of times during the season just knocks you at the end. West Ham have had injuries but they will be hoping they can have a good one next season.”