‘Its a tough call’, ‘He is very average’ – Some West Ham fans react to fan’s pre-Man City suggestion 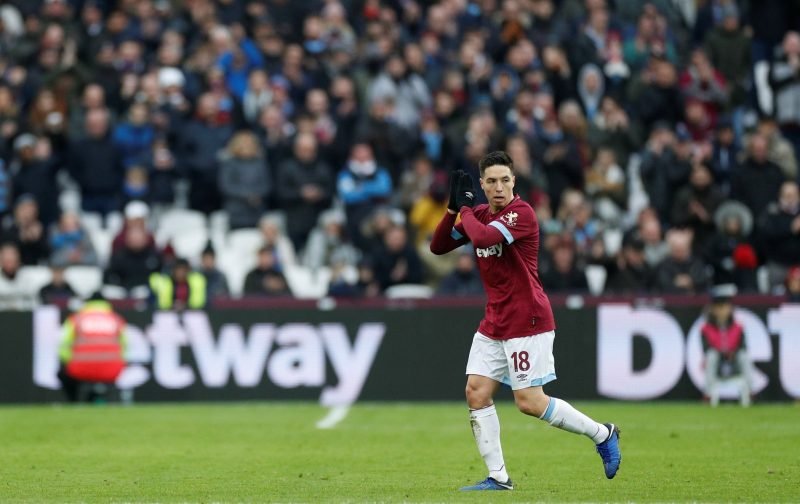 West Ham United travel to Manchester City on Wednesday night looking to secure back-to-back wins in the Premier League for the first time since December, but Manuel Pellegrini may have to add more ‘composure’ to his midfield as one supporter put it on social media.

The supporter in question, West Ham News, suggested in the build-up to the game that the Chilean should look to re-introduce Samir Nasri to his starting XI against the duo’s former side, as the Frenchman can offer his manager someone who can “keep hold of the ball and relieve the pressure on our defenders”.

To do so, one man who featured in the Hammers’ win over Fulham last Friday must be dropped, and the name emerging from between the lines was Robert Snodgrass.

Now, West Ham News does not strictly specific that it is the 31-year-old who has to make way, but the Tweet does state that Nasri should be brought in to play alongside Felipe Anderson and Michail Antonio – suggesting it is not a midfielder who more often sits back closer to the defence such as Declan Rice or even Mark Noble.

Removing the Scot is somewhat of a surprising suggestion, however, as the 26-cap international has been one of our, if not the, best set-piece takers this term.

If Nasri is deemed fit to play and earns the starting spot, it would only be the former-City star’s third start in the Premier League as a Hammer, while preventing Snodgrass from clinching his 20th of the season after forging a regular spot for himself.

When other supporters picked up on the suggestion that Nasri should start, these were some of the replies…

There’s definitely a lack of creativity from open play at the moment without lanzini or nasri, snodgrass has been needed for set pieces but from open play him, rice and noble all together don’t do enough going forward. Equally we are playing city so won’t have he ball anyway!

But loose snoddys set piece threat? Its a tough call – id rather stick with snoddgrass and let nasri play vs new castle

Agree Nasri and Arnie to start for me

Yes as he is very average

I mean, his set pieces haven’t exactly been great outside the Fulham game