‘If it’s not broken then don’t fix it’, ‘100% agree’ – Loads of West Ham fans react to Pellegrini’s pre-Crystal Palace admission 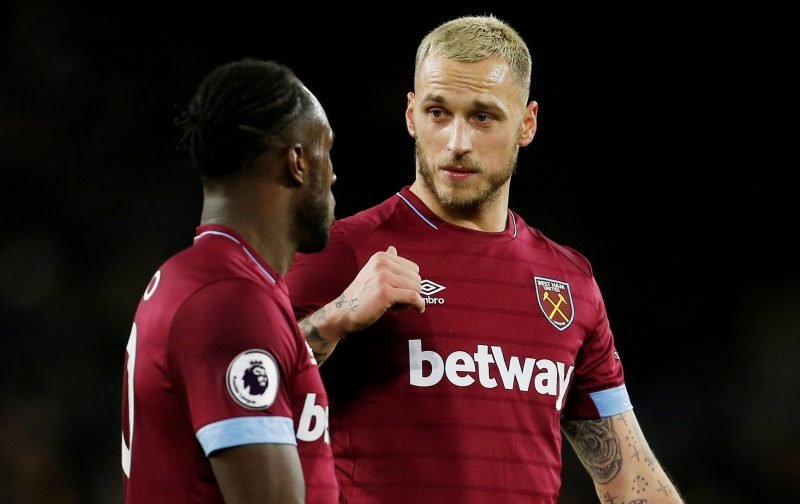 Loads of West Ham United fans have been reacting to the latest squad update ahead of Saturday’s trip to Crystal Palace, as Marko Arnautovic is passed fit to play.

Arnautovic was forced to sit out Monday’s one-all draw at home to Liverpool, when the Premier League title hopefuls loosened their grip on the top spot despite a controversial goal by Sadio Mane.

The right foot injury the former Stoke forward suffered away to Wolves has since healed, however, and allowed the Austrian to train uncompromised all week.

Manuel Pellegrini has also confirmed that the 29-year-old will have a seat on the team coach that travels to Selhurst Park at the weekend, but there will not be a spot for Samir Nasri, as the Frenchman still needs a few more days to overcome his calf injury.

“Marko Arnautovic and Aaron Cresswell worked the complete week without any problems, but Samir Nasri needs some more days to recover from his calf injury,” stated the Chilean boss during his pre-match press conference.

“Of course, it is good news for us. He is a player who makes a difference and is important for our team. He needs to recover his best shape after a long time without playing and with his last injury, so I hope he will be a very important player for us over the last part of the season.”

Not every West Ham fan has forgiven the Austrian for his January antics when clubs in the Chinese Super League chased his signature, but there are a few who are glad he’s back.

Keep him on the bench. Chica deserves the start

I’d personally play Hernandez but to play my own devils advocate, if Nasri was fit then I’d probably change the team to put him in but that’s more ‘tactical’ as think we need more creativity for against Palace.

If Arnautovic’s head is focused on football and he’s fit to play, he has to start for me. He’s our most effective striker in terms of scoring goals, creating chances and linking up play. Hernandez actually did ok against #lfc but we have to start our best striker in my opinion.

Same team to start as Monday night, only fair! Arnie on second half if Chica tires. Simples!

100% agree, if it’s not broken then don’t fix it. You’d be really fed up if you had played well then got dropped. Not good for morale

I’d start Arnautovic cos hes overall the much better player, individually & for the team. But imo Pellegrini will start Chicharito after we got a positive result vs Liverpool. It will affect his confidence / motivation if dropped https://t.co/zNPFsPg31t

.@ExWHUemployee has tweeted that the West Ham players thought Javier Hernandez played well the other night, vs Liverpool, so they’d be extremely surprised to see him dropped against Crystal Palace… Arnautovic must 100% be back.????⚒

Crystal Palace vs westham… I think this is where we are going to struggle, I think we have a few players back so I’m hoping we have a strong team.. Arnautovic better make up for the last few weeks by scoring a hat trick

Fantastic to see that Arnautovic is fit for the Weekend. Love it when a player really goes an extra mile for his club…