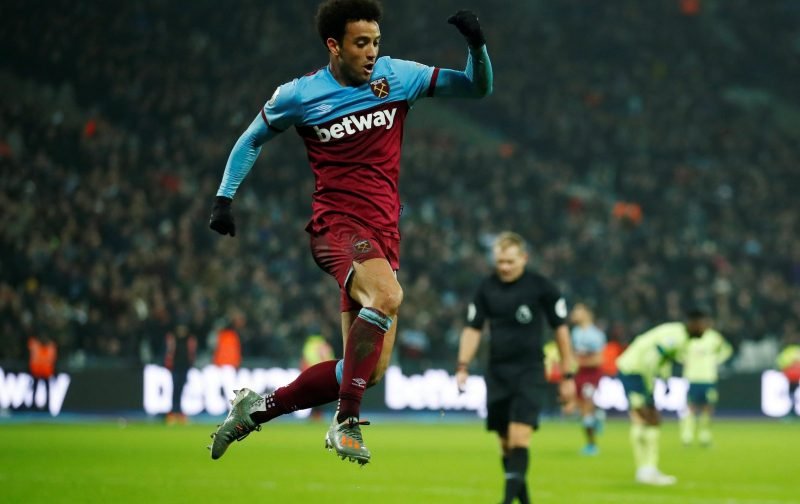 Lots of West Ham United fans have been reacting on social media after Felipe Anderson spoke of his unyielding love for SS Lazio amid claims of a potential summer transfer.

Anderson joined the Hammers from Lazio two years ago for a club-record £36million, though the fee could rise to £41.5m, but struggled heavily for form during his second campaign in east London.

The £85,000-per-week Brazilian was only able to find the back of the net once in 25 Premier League appearances, while providing four assists and only starting 20 of his outings with David Moyes not afraid to look for options elsewhere in his squad following the restart.

All of Anderson’s assists also came before the turn of the year while his sole strike of the season came on New Year’s Day during a 4-0 thrashing of AFC Bournemouth, who ended the term with the top-flight’s third-worst defensive record having shipped 65 goals on route to relegation.

Anderson’s struggles in 2019/20 saw his future at the London Stadium shadowed in doubt after the final ball was kicked, leading to speculation that the 27-year-old had held talks with Lazio over a potential return to the Stadio Olimpico as Moyes looked to sell.

The winger spent five years with Lazio before joining West Ham and is clearly still fond of the Serie A side, however he is not intent on returning to Italy just yet.

“I am staying in Sardinia for another five days,” he told La Lazio Siamo Noi. “I miss Rome, before coming here I was a few days in the capital with my friends since I had been missing for two years.

“Lazio is always in my heart – I cheer for my teammates. They were five wonderful years. Future? I don’t know, my head is at West Ham but let’s see what happens.

“A message to the Lazio fans? Thank you for your support. I send you a hug.”

West Ham fans reacting on social media to Anderson’s comments believe they are more of a goodbye to the Irons faithful than they are a thank you to the Lazio fanbase, and believe that his time at the London Stadium is truly over.

Never good when someone says we will see what happens

See ya later then!!!

Clearly his head is not at west ham.

I hope not, but these are goodbye words

Not all West Ham supporters will be sad to see Anderson leave, it would seem, as a few have shared their belief that he is not up to the standards required in England.

Not quick enough for the style we are trying to play, unfortunate but wish him all the best

There are plenty who still feel Anderson has a future at the London Stadium, and believe Moyes should offer the Brazilian an arm around the shoulder rather than kicking him out the door.

Fans will say, “oh his heart isn’t West Ham, sack him off, sounds like he wants to leave”.

He is a foreign player that has struggled lately and has only played for us for 2 seasons.