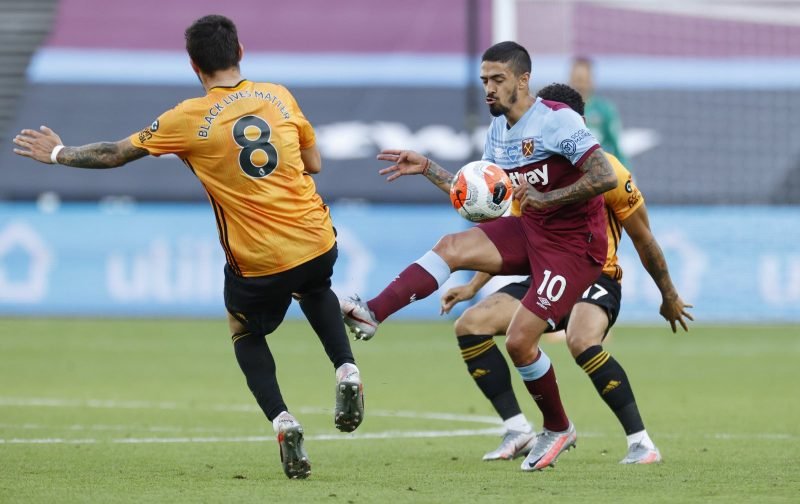 Lots of West Ham United fans have been demanding on social media that the London Stadium outfit sell Manuel Lanzini over Felipe Anderson this summer.

Anderson’s future with the Hammers has been cast in doubt due to the east London side’s dire need to raise funds for transfers, with reports suggesting David Moyes could offload the Brazilian and a string of the expensive acquisitions made during Manuel Pellegrini’s tenure.

A return to former side SS Lazio has been muted for Anderson, who was signed in a club-record deal worth £36million rising to £41.5m with add-ons, although the winger has clarified that his head is ‘at West Ham’.

Moyes is hopeful that selling some of the Irons’ recent additions will free cash that he can spend on bringing down the average age of his squad, having boasted the fourth-oldest side at 27.4-years-old in the 2019/20 Premier League – behind only Crystal Palace (29.0), Watford (28.4) and Burnley (28.1).

Lanzini’s future at West Ham has also been questioned, with the Argentine likewise considered surplus to requirements after under-performing this term having assisted just three goals and failed to score in any of his 24 top-flight appearances.

The £14.4m-rated playmaker also penned the last of his assists during a 3-2 defeat at home to Newcastle United last November, after which he would find himself left on the bench eight times in 20 games.

Anderson also struggled in 2019/20 as he sought to replicate the form displayed during his maiden campaign with West Ham, having penned just one goal and four league assists after boasting nine goals the previous term.

Lots of Irons supporters believe there is still much to come from Anderson, and that it should be Lanzini who makes way in the summer as Moyes offloads those surplus to requirements.

Agree… I’d sell Lanzini, Yarmalenko and Snodgrass from our midfielders.. would keep Anderson and hopefully he can get back to his first season best.. would like a Dacoure type central midfielder

Yes. Exactly that. Lanzini cares about money and Anderson clearly wants to be here. He needs a chance playing in the centre. Not sure how the board are getting away with this.

So agree. Lanzini best years for us are long gone. Much more could come from Anderson I think.

Not every Hammers fan believes Anderson’s future should be at the London Stadium, as a range of supporters would consider selling the Brazilian if a respectable offer is tabled in the coming weeks.

Definitely sell Lanzini, Anderson keep but if a good offer comes we have to consider https://t.co/tAAQdtcYW1

A fair few West Ham fans also feel that both Anderson and Lanzini have played their final games in claret and blue, as the pair should both be looking for new clubs this summer.