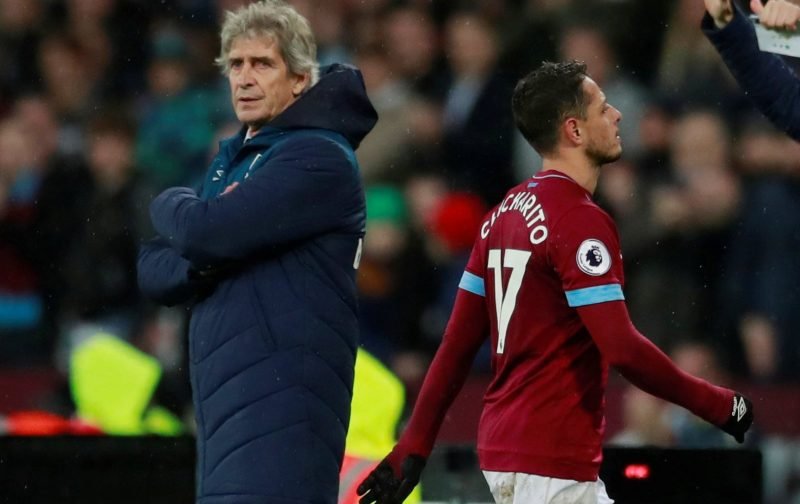 We travel to Cardiff City on Saturday looking to keep spirits high with another win, but Manuel Pellegrini still has a decision to make over who he starts in multiple positions.

Like against Newcastle United, the striker and right-wing spot are up for grabs for whoever can prove they deserve it the most in training.

Javier Hernandez and Robert Snodgrass were given the shout last time out, and in return the wide-midfielder curled in a pinpoint corner for Declan Rice to nod home his second goal of the season.

The Mexican centre-forward, on the other hand, had a tougher time against Rafa Benitez’s side, all the while Marko Arnautovic watched on before eventually replacing his strike partner after 70 minutes.

The Austrian has not been in amongst the goals recently, either, thanks to numerous injuries and a lack of form, with his last successful effort coming on January 5 against Birmingham in the FA Cup.

Deciding who presents the most severe threat to Neil Warnock’s Bluebirds could give Pellegrini somewhat of a headache, as both have their merits and both have their downfalls.

While on the flank, opting against including Snodgrass again has less potential to handicap the Hammers thanks to Michail Antonio’s splurge of form, albeit with less of a direct threat from set-pieces.

Hernandez keeps his place at this moment, but bring Antonio in for Snodgrass.

I’d rather start my nan than arnie faster he is gone the better ????

Arnie to start, Hernandez on around 65 mins for some late counter attacks. We need to start quick in the game.

Hernandez for sure. Difficult choice though. Snodgrass has been great from corners recently but Antonio has been bang in form.

Nastiest on bench for me , start Chicharito and Snodgrass
Arnie and nastier can come on later

Hernandez all day long. Would like to see Antonio rip their defence up but Snods has been doing well. Nice predicament to have for a change.